8 Scariest Facts You Need To Know About Water Pollution 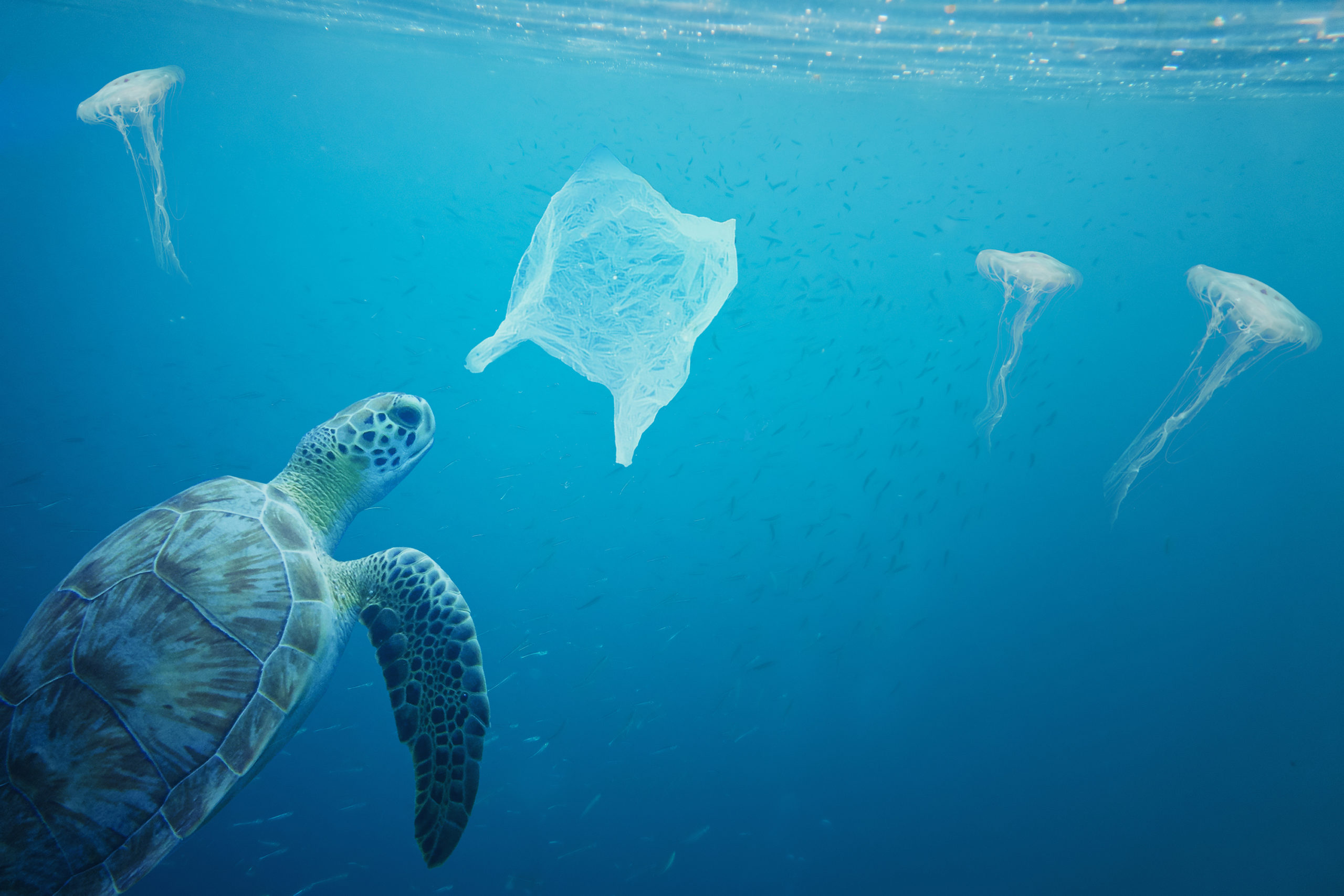 “Every year, more people die from unsafe water than from all forms of violence, including war.”

Water is essential to life. We know that one of the biggest holiday events of the year, Halloween, just passed; but what if we told you about something that is truly frightening?

Finding out what exactly is in your water supply can be a scary situation.

Why? Water pollution affects the health and wellbeing of everyone on earth. It also directly threatens our aquatic ecosystems and marine life.

Here are our 8 scariest facts you need to know about water pollution:

There are multiple variants of contamination in different water supplies around the world. Whilst the complete list of possible pollutants is too vast to mention here are some of the key contaminants:

Did you know that over 784 million people live without primary access to clean water?

It is an astounding figure to comprehend though if we break it down it’s roughly one in every ten people on earth. The significant consequences of unsafe water are diarrheal diseases which kill more children under five years old than malaria, AIDS, and measles combined.

In developing countries, 70 percent of industrial wastes are dumped untreated into waters, polluting the usable water supply. The disposal of chemical and industrial waste, agricultural waste and waste from the human population has led our waterways to breaking point. So what exactly is dumped into the ocean, rivers and streams? Let’s take a look. 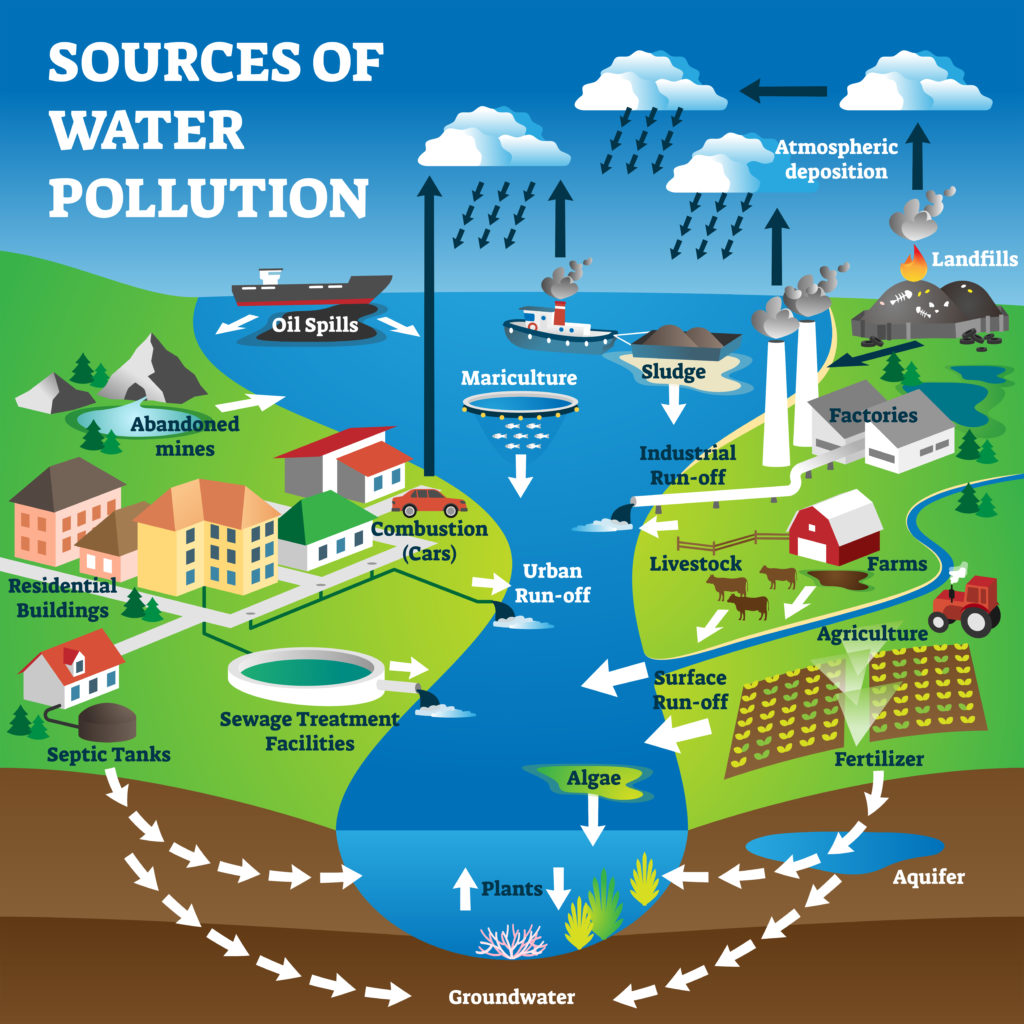 Rivers are an essential ecosystem and provide a habitat and a source of freshwater for both marine and human life. Unfortunately, the global pollution of river systems has had a devastating effect on those who depend on it, with toxic waste flowing from nearby industrial factories, farms and urban centres. Here are a few examples from around the world: 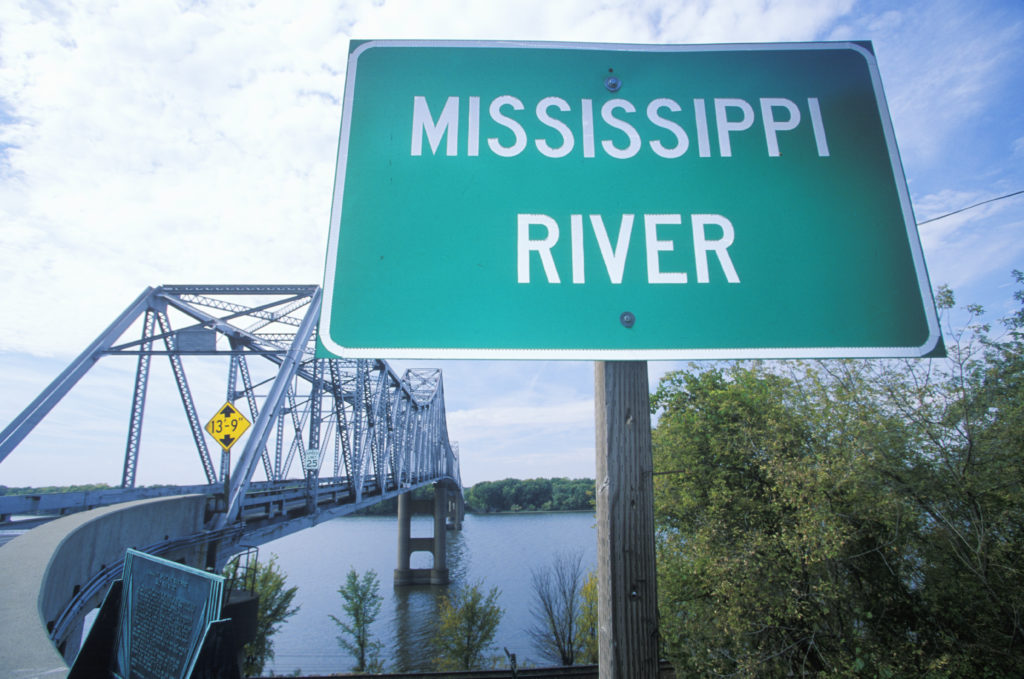 For example, Flooding can lead to an overflow of contaminated and polluted water entering the wells used to supply drinking water. In urban centres, flooding can cause ground and tap water to be contaminated with enterovirus, hepatitis A virus, norovirus (G1, G2) and adenovirus at high concentration levels and total coliforms E. coli. These viruses then enter the human body when the polluted water is consumed which often occurs post natural disaster when populations experience a clean water crisis.

Another concern caused by natural disasters is marine debris. Marine debris is a result of large-scale weather events such as hurricanes, floods, tropical storms, and tsunamis that pull debris from the land out to sea.

According to Ocean Service:

“The Japan earthquake of 2011 and the resulting tsunami destroyed whole communities, creating an estimated five million tons of debris. Much of this debris remained along the coast of Japan, but a portion of it was washed into the Pacific Ocean.”

A recent report by Environment America Research & Policy Center and Frontier Group highlighted that in 2020, 328 beaches were potentially unsafe for swimming. Furthermore, about 10 percent of America’s beaches fail to meet the federal benchmark for what constitutes safe swimming water. The pollution is most often caused by stormwater runoff and sewage overflow, causing the water to be overrun by disease-causing bacteria.

Each year, people suffer an estimated 57 million illnesses including nausea, diarrhea, ear infections, and rashes as a result of swimming in U.S. waters. Poorly maintained or outdated sewage systems is one of reasons pollution of natural water systems occurs as well as runoff from agriculture farms. An increase in livestock farming has led to a water pollution crisis due to an increase in chemical run-off, pesticides, fertilizer and animal waste entering the natural environment.

Some of the world’s most polluted beaches are dangerous, toxic to human and aquatic life, and as a result threaten species to extinction causing irreversible damage.

The Santa Teresa Beach in Costa Rica, Botafogo Beach in Brazil, Manilla Bay in the Philippines, Tarutao National Park in Thailand, Juhu Beach in Mumbai India, Cocos Islands in Australia, Lekki Beach in Nigeria and Kuta Beach in Bali Indonesia are just some examples of beaches found drowning in plastic pollution, debris, human waste and toxic chemicals. Beaches in destinations including Malaysia, the Dominican Republic, Tanzania, Greece, Italy, Lebanon and Peru have also been mentioned in research due to high levels of ocean pollution.

A lack of access to a toilet and appropriate sanitation is one of the leading causes of illness and death among children. Today, around 60% of the world, 4.5 billion people, don’t have a toilet in their homes.

According to a joint UNICEF and World Health Organization report this year, more than 1.1 billion people in the world practise open defecation. The lack of access to a clean, safe toilet directly impacts the public health of the population and the surrounding environment. The majority of those still using open defecation are based in:

It is worth noting that some locations, depending on cultural and spiritual practices, willingly practice open defecation and reject the infrastructure of modern toilet facilities. Poor sanitation is responsible for 10% of the global disease burden among children making the need for education, awareness, and change paramount for public safety.

One of the most devastating facts about pollution is the ongoing threat it has on marine species. Single-use plastic and other debris are one of the worst forms of water pollution as they break down into microplastics, never truly disappearing from the environment.

Currently, over 267 species worldwide are being affected by plastic pollution and 700 species are at risk of becoming extinct. Research has found that water birds and marine animals are particularly at risk. Sea turtles, manatees and whales are some of the most at-risk species. 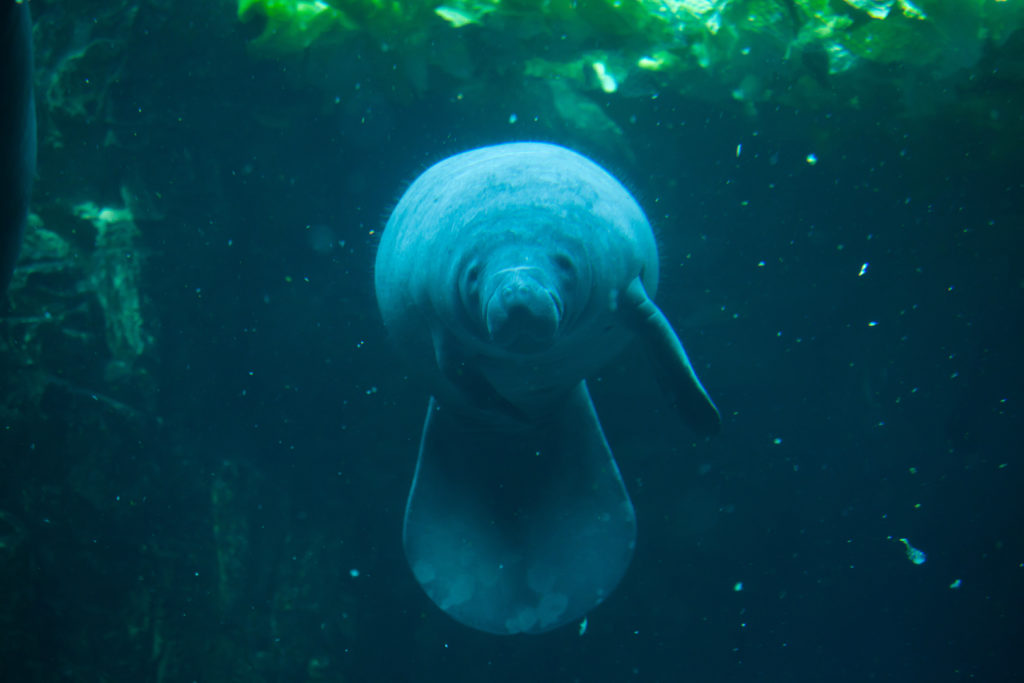 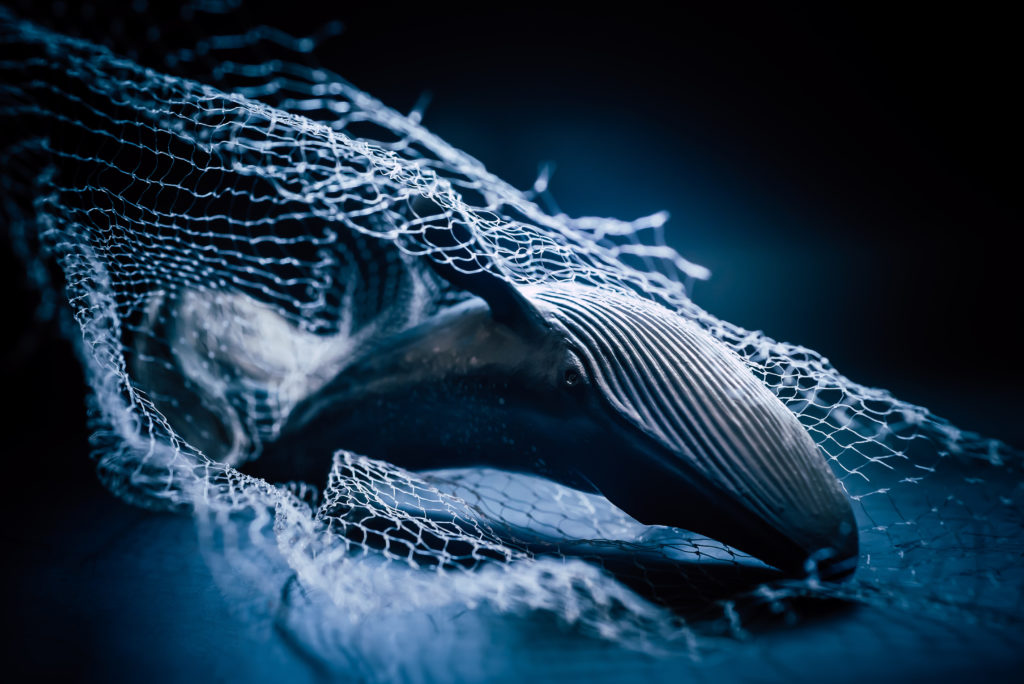 Plastic can easily obstruct the animal’s digestion and lacerate the intestines causing severe injury and or death. In addition, plastic and debris can cause entanglement out at sea.

The following single-use plastic items are the most commonly ingested forms of plastic pollution by marine and wildlife:

8. A LACK OF CLEAN DRINKING WATER

Universal access to clean water is a fundamental human right, yet for various reasons, 1-in-4 do not have access to it. According to Our World Data – Safely managed drinking water is defined as: “improved source located on premises, available when needed, and free from microbiological and priority chemical contamination.”

A key factor determining your access to clean water is both where you live and your income status. Over 74% of the world in the higher income demographic had access to clean drinking water in 2020.

Access to improved water sources is greater in urban areas when compared to those living in rural areas. However, even in higher income areas a clean water source may not always be safe to drink. Access to clean and safe drinking water is a bigger challenge than access to water which is safe for bathing, cleaning and flushing toilets.

The United Nations Sustainable Development Goals lists clean water and sanitation as one of the 17 Goals To Transform Our World. Goal 6.1: By 2030, achieve universal and equitable access to safe and affordable drinking water for all.

In conclusion, water pollution affects us all. We need to come together to allow equal access to clean drinking water, to protect our marine life and beaches, and to support small businesses who actively pursue sustainable alternatives. 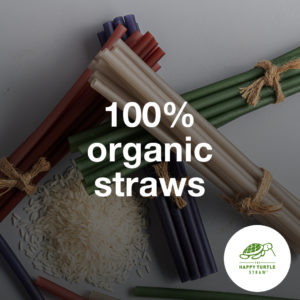 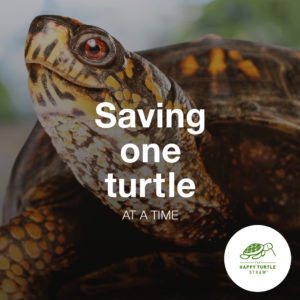 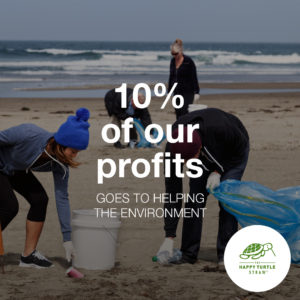